When Past, Present and Future Collude to Maintain Status Quo: Disrupt! 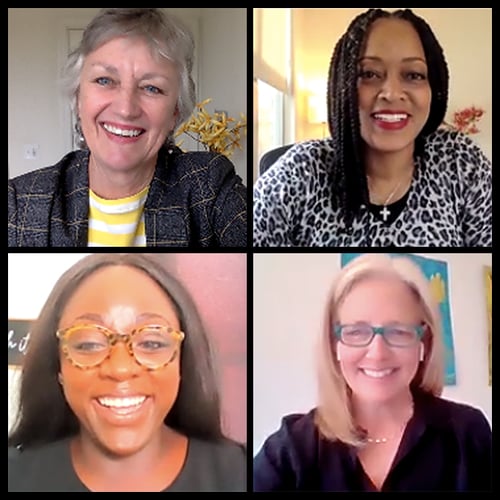 In all candor, I just blinked and realized two weeks had passed and it is alarming what I didn't accomplish. On most days, so caught up in the present (two office moves for starters, responding to a request for proposal, delivering a workshop for a favorite client), I forget the past and ignore the emerging future. On other days, so caught up in the emerging future and conceptualizing what that could be, I get totally untethered from the present (what day is it??)

As leaders of teams, of organizations, as agents of change, how do we engage in the present, the past and the possible future in a way that feels awake and engaged but not overwhelmed? There's this insistent and painful tug of the past as its truths about systemic inequities continue to be revealed. Over. And over. And over.

Our firm is intentional about supporting individual and organizational transformation -- from a mindset exclusively focused on productivity to a mindset and practice focused also on people and the environment in which they work together. Untangling what it means to be diverse and inclusive.

Our whole team is transformed continuously by this work and by each other. What really has my attention as a white woman these days is the understanding and the embrace of past, present AND future simultaneously. I'm repeatedly, continuously waking up to and appreciating the vast difference between my experience of those timeframes and those of my black business partner and our black colleague from Ghana. The richness of the relationships on our team and the opportunities for deep, deep conversation is nothing I would have ever imagined years ago. And even in the messiness and overwhelm that sometimes characterizes those conversations, I'd have it no other way. This is where the deep rumblings of transformation and learning start to get expressed.

In the US, we are immersed in the past as present: black is bad, white is good. Black is inferior, white is superior.  Past and present cannot be untangled. Check out Angel Acosta and the website on 400 Years of Inequality, David Zucchino's book Wilmington's Lie, Eddie Glaude's Begin Again, and Larry Ward's America's Racial Karma. Watch the 2017 documentary on James Baldwin, I Am Not Your Negro. The patterns are relentlessly in your face.

He died in 1987. This is 2021. Terror expressed as aggressive superiority is the January insurrection at the Capital. Superiority expressed as calculated arrogance is the Atlanta murders in March.

Journalist and author Charles Blow (The Devil You Know) insists that waiting for white people to wake up is both pointless and debilitating.  As he shared with Terry Gross in a recent Fresh Air interview:

"The idea that Black people should have to wait for White people to grow out of racism, which they've been waiting for for 400 years, is problematic for me. Plus it's a passive position for me and I refuse to take it. (So during BLM protests last summer) were there some (white) people who experienced personal conversion? Yes and I'm happy for you. But what polling suggests is that in that moment, when everyone was locked down, ... this was an outlet. When life started to get back to normal, the support for BLM started to drop back to the position it had been before the protests."

A year after COVID19 launched, it's hard to imagine that we are getting "back to normal" given the January insurrection, a second impeachment, and the ongoing bifurcation of the American population into camps unrecognizable to each other. But what I think he means is that without constant visual evidence of cruelty and abuse, white people go back to work, back to safe lives, to our "norm". This is the myopic present moment.

I fall into that trap, too - run a business, pay bills, worry about a friend who just had a stroke, coach a client tackling a tough issue at work, have several ailing trees removed from our yard, practice a piece on the piano for an upcoming lesson. Privilege abounding.

Yet, for me, because this is our work, I also have a daily reminder that "normal" life isn't really what we are after. We're after disruption. Ultimately, we're after a world without unmitigated fear and rage.

So our team searches for more effective ways to bring diverse voices together to actively and compassionately listen to each other. I personally seek to understand and appreciate the deep emotions of my black and brown colleagues, clients and community because their experiences are very different from mine. And with every conversation some veil is lifted or some insight gained, some comfort disrupted, some assumption splattered.

Which brings us to the future: the compelling purpose and invitation emerging. Which is also deeply embedded in the past. During the first months of 2021 many of us have been nearly consumed by emotional bedlam. It continues.

And yet, the future beckons: here we are, on the edge again of a new chapter that is waiting to be defined and declared, to be imagined and co-created.

If we’re to live up to our own time
Then victory won’t lie in the blade
But in all the bridges we’ve made
That is the promised glade
The hill we climb
If only we dare
It's because being American is more than a pride we inherit,
it’s the past we step into
and how we repair it
―Amanda Gorman 2021 Inauguration Speech

What bridges are we building? Where do we dare? What hill are we climbing? How well do we grasp the past? How will we repair it?

Each day is a roller coaster of optimism and deep sorrow. Optimistic that collectively we can create big change in small but disruptive steps. Sorrowed by the exhausting and repetitive messages and actions from groups of predominantly white individuals who rally around hate and fear.

So, consider this: “Our racial suffering is deep and wide. It is a particular kind of samsara (birth, existence, dying), repeated cycles of bitterness, pain and fear. It is sustained by our conditioning, both individual and collective. It is the undercurrent of a failed paradigm of aggression, ownership of peoples and enduring institutionalized racism. This failed paradigm of views presents us with a profound opportunity to rebuild the shape of our thinking, speech and action as we can and must redefine what it means to be a human being.”―Larry Ward

My friend and teacher, Dr. Ward (www.thelotusinstitute.org), shared that the week after the insurrection. He also encouraged us to take care of ourselves daily. Not focusing on what he calls "the collapse" of white supremacy - but to understand it completely, and yet not put all our energy there. Instead, to "put your energy on what's rising. This is a profound opportunity for us ... to remake the world right where we are. To remake our thinking, remake our speech, our behavior, our systems, our connections in communications with one another. Remaking our generosity, our patience."

All of which takes courage - to look with new eyes at the past, to see clearly the present, and to step fully into the emerging future.