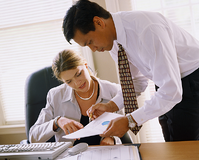 We have worked with hundreds of leaders inside organizations administering, delivering and coaching around 360 degree feedback programs as a developmental process designed to improve leadership skills. We have been fascinated by the way leaders respond to the feedback from their bosses, peers and direct reports. They tend to respond in the following ways:

So what can happen to convert leaders to the change of heart needed to lead at a higher level, to accept and own their stuff? While we find there are often specific behaviors people need to focus on, more often than not, there is a new relationship (usually with the leader himself/herself) or a responsibility that needs to be discovered for their to be a true conversion.

Without the aha moment, many leaders simply play it safe downplaying the need for real change. In the Arbinger Institute's fable classic, "Leadership and Self Deception", the book makes the point that despite trying to change our behavior, we do not really reach a point of acceptance of feedback without our acknowledgment that we are:

And being in the box or out of the box remains a choice that we get to make every day because we all struggle with our judgments of others. It's the self awareness of whether we are in the box or out of the box that unleashes the empowerment of our full potential and the full potential of others.
What will be your response to your next 360 feedback program? Will you find a way to own your own improvement, to accept what is said without judgment? Will you seek to repair the relationship or your view of others in order to lead differently in the future?
This blog post was originally authored by Becky Dannenfelser.
We would love to discuss how Clearwater Consulting can help your organizations with delivering and coaching around 360 degree feedback programs. Call us for a free consultation at (404) 634-4332 or contact us here.