Posted by Shirley Wulf on Tue, Feb 19, 2013
“The challenge of leadership is to be strong, but not rude; be kind, but not weak; be bold, but not bully; be thoughtful, but not lazy; be humble, but not timid; be proud, but not arrogant; have humor, but without folly.” — Jim Rohn

If you desire to move to the top ranks of leadership in the workplace, it takes a lot to build your credibility and a track record of success. Indeed, in today’s flatter organizations, leaders need to stand out. Research from the Center for Talent Innovation, October 2012, states that executive 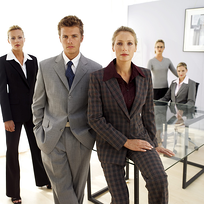 presence accounted for 26% of what it takes to get promoted according to senior executives. While companies have started noticing their talent needs to have executive presence to get ahead, that doesn’t mean the leaders have it or even know what to do about it. One organization we worked with recently came to this conclusion as they implemented their succession planning initiative. They discovered more than 40% of their identified candidates (both men and women) were missing one key element: executive presence.

One leader we worked with, “Tom”, has been the interim CFO at his organization for more than two years. While Tom is very capable of the skills required to do the job, it is well known that he will not be offered the official CFO position even though he wants it. The reason given is a vague explanation that he just doesn’t fit the part. Clearly Tom is competent at his job, yet his boss fears telling him that his lack of executive presence is holding him back.

So what is Tom missing? He has a strong finance background. He is productive and has steered the ship for the past two years, but he is not one to share a point of view or try to convince others to adopt new change initiatives. He does what is expected of him, but he doesn’t stand out. Many people will contend that you either have executive presence or you don’t. Others believe the behaviors and attitudes that portray executive presence can be taught and obtained like any other leadership traits.

Many companies have identified executive presence as a developmental need and are taking steps to make that happen. Tom’s organization is shortsightedly willing to pay a substantial price to replace a competent individual who simply needs to develop his executive presence. A modest investment in Tom, would allow both Tom and his employer to reap the benefits from his advanced leadership skills at an overall much lower cost to the organization.