Last month we invited colleagues and clients to complete a survey identifying what had the greatest impact on their career success. With over 100+ leaders weighing in, the winner with one-third of the votes was "I had a supportive boss."

Query: If you're the boss, whose development are you supporting right now? Who will identify you in years to come as the driving force in their success? 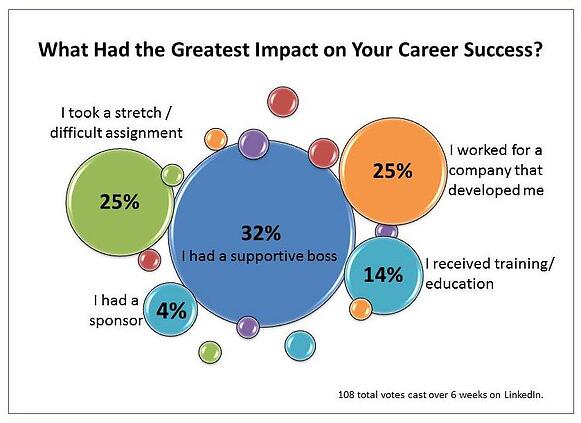 Two items tied for second place - one was self-motivation:  "I took a stretch/difficult assignment."

Query: What comfort zone are you settled into and what will it take to stretch beyond what you know and can control to what you may not be so comfortable with or can claim as expertise?

Sheryl Sandberg, in Lean In, points to research that suggests women are less likely to stretch than men because females often see the list of skills missing, presuming therefore that they are currently incapable of doing a great job, rather than claiming the chance to reach into the opportunity to learn something new. Regardless of gender, is it a matter of confidence or of opportunity that we don't put ourselves more often in the position to extend beyond our current repertoire?

The other item in second place points to the cultural climate for leadership development:  "I worked for a company that developed me."

Query:  How savvy and dedicated is your current company, your division, your team to creating a climate for development?

In engagement survey after engagement survey, one of the priorities needing attention is the definition of career paths and the attendant training and exposure that enables that growth to occur.

Finally - only 4% of our respondents pointed to a sponsor, someone who went out of their way to open doors, to back them, to publicly proclaim and support them.

Query:  Who might you sponsor in your company? Who can be the beneficiary of your powerful connections and sage wisdom?