Atlanta has been in the national news for the recent snow storm and unprecedented traffic jams that resulted. I patiently waited at home with my kids (thankfully home from school safely) to hear when my husband and friends would make it home. It took my husband 13 hours, about $70 in gas, and a brief stay at a church due to a road closure before he was finally able to make it home safely at 2 am Wednesday morning. He had left Midtown Atlanta at 1 pm Tuesday afternoon. Some of our friends were not as lucky and spent the night at a Target store, child’s preschool, church, or they simply abandoned their cars and walked through the night to get home.

While there is plenty of finger pointing and blame to go around, I think this is the perfect opportunity to remind people of the leadership lessons this situation presents for everyone to learn regardless of the job you have or industry you work in.

Plan Ahead and Plan for the Worst

It’s like that old saying: “If you fail to plan, you PLAN TO FAIL.” You may think you’ve got a plan in place and feel prepared to face whatever comes your way, but no business is immune from unexpected chaos and crisis. I’m sure our city, county and state governments had plans in place for the winter storm, but did the plans change when the storm came earlier than expected? What contingency situations were they not prepared for? It’s usually not the initial event that creates success or failure; it’s your response to the situation. Are you prepared?

Take the time to sit down and develop a “what if” list of bad events and your company’s planned actions/response. Stock price dropped suddenly? What’s your plan to respond assertively and proactively? Did one of your key leaders drop dead of a heart attack or resign suddenly? What’s your succession plan to reassure employees and key stakeholders? Is the new product launching successfully? If not, how do you fix it quickly and preserve the integrity of your business?

The truth is we are usually overly optimistic about our abilities to handle a crisis unless we have planned for it and practiced the plan. How many of you practiced fire drills in school? We all did. I bet you even remember the mantra: Stop. Drop. And roll. You practiced it and repeated it as a child and it’s still with you now as an automatic response. Develop a thorough strategic plan for your company and share it with your employees. Then, follow it up with training and a contingency plan when Plan A doesn’t work. 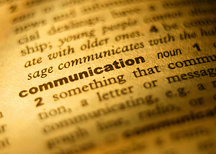 Communication is KEY to success in any situation. Communicate the plan early and often. Read that again. Communicate EARLY AND OFTEN. Be clear and concise in your communication and repeat it often until it sticks in people’s memory. Are there snow routes designated in Atlanta? If so, are they clearly marked and do commuters know? How are officials going to communicate emergency plans to drivers stuck in their cars? If you’re stuck in your car with low cell phone battery, how are you going to stay in touch with family and get the information you need regarding traffic and road closures?

Think about your own company. If your business is starting layoffs, communicate the “why, when, how, who” and other important details. Are two departments working together for the first time? Sit down together to communicate each team’s expectations, preferred work styles, strengths and weaknesses. Use a facilitator to help get everybody on the same page.

Communication is the easiest word to say to someone, but one of the hardest skills to master. Just because you sent out a memo or told somebody the information doesn’t mean you’ve actually communicated. Communication includes showing people what needs to happen through your actions (set the example), repeating information until it’s second nature to everyone, and most importantly, asking people what questions they have and then answering them until they understand. As smart as we all think we are, nobody can claim to read your thoughts and understand your intent. That’s why the responsibility of communication rests on YOU.

You’re the leader and, ultimately, the responsibility rests with you. People really don’t like it when their leaders point the finger at someone else or simply avoid talking about the mistakes they made. Wouldn’t it be refreshing to have leaders say, “We underestimated our need for…”, or “We didn’t plan adequately for…”.

How about the next time something goes wrong, you admit your mistakes and then communicate what you learned from it. That shows people you care about learning from your decisions and making the situation better for the next time (because we all know that there will be a next time). It also sets an example for your staff to follow.

School officials across the Atlanta metro area seemed reluctant to cancel schools before the winter storm arrived even though the National Weather Service had issued a winter storm warning early Tuesday morning. Perhaps some decision makers will admit this was a mistake and choose to cancel schools earlier the next time the weather service issues a winter storm warning. Regardless of what decisions we each made in this situation, we all have something to learn.

Develop a thorough review process and seek feedback from everyone on the team for how to improve next time. It’s not about discovering who to blame. It’s about learning what worked and what didn’t. Since Atlanta experiences snow infrequently, it would make sense to talk to several leaders in northern cities who do handle snow and ice regularly to learn about their processes and get their advice. Each person you get feedback from will have a slightly different perspective and will offer some advice of value to use in the future.

Also, if you continue to only seek feedback from the same group of people, you aren’t going to learn anything new or grow from gaining new perspective on a situation. You can’t possibly know what great ideas are out there and where they’ll come from until you seek them out. Once you have feedback from a variety of sources, use it to develop a better plan for the next time. When was the last time you asked for feedback on your performance?

While things are getting back to normal here in Atlanta, we’re learning more about the random acts of kindness that occurred during this winter storm disaster. And that’s one final lesson to remember from this event. You don’t have to be considered a leader to step up and make a difference. Simple acts like providing warm shelter, food, dry clothes, and a car ride made a difference for hundreds, if not thousands, of people during the storm. So what did my husband and I learn from this experience? To make sure he has a cell phone charger in his car and, at the first sign of snow in Atlanta, book a downtown hotel room immediately!