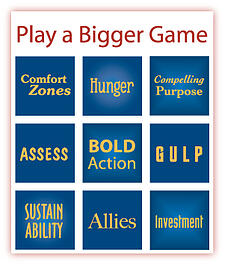 At the recent annual conference for Wiley distributors of DiSC assessments, we had the pleasure of hearing Alyse Nelson's keynote. Author of VITAL VOICES: The Power of Women Leading Change Around the World, Alyse has been acknowledged as one of the voices that matters, a 40 under 40 internationally, she is co-founder of the ngo Vital Voices Global Partnership, along with Hillary Clinton and Madeleine Albright. Alyse is now CEO and President.

Compelling, bold, inspirational, humble, and engaging, her story has all the earmarks of a Bigger Game. Vital Voices holds conferences and offers leadership and training for emerging women leaders around the globe. It lives in the space of "Investment" on The Bigger Game game board: investing in women to encourage their dreams; to give them the platform to share, enrich, and invent with each other; and to learn from each other.

Every story in her speech and in her book certainly echo the elements of the Bigger Game model—a compelling purpose bigger than you are, relying on allies to bring the vision to life, and sustaining the work by paying it forward.

While the mission of the organization is to "identify, train and invest in emerging women leaders" across the globe, the presentation was not about what Vital Voices teaches others, it was all about the lessons learned from these natural leaders.

1. A Compelling Sense of Purpose

When we are compelled, we are prompted to make a choice that is no choice, it's a necessity. For Alyse, the initial tug from her core meant flying to China while still a college student to attend the United Nations Fourth World Congress on Women without actually having a ticket to participate and not having the appropriate visa recognized by China. Once there, she was surrounded and overwhelmed and inspired by women hungry for change in some visceral way, driven by a deep desire for communities without human trafficking, rape and violence; for communities that encourage education and self-sustaining businesses owned by women.

2. Strong Roots in the Community

Here the unique strengths of women's leadership come to the fore—the ability to empathize, to grow deep roots within one's own community and, from that position within the community, to lead laterally. Alyse noted "Leaders see promise where others see problems." And their views aren't only toward the far horizon, but extend around them, identifying possibilities at hand.

3.  An Ability to Connect Across Lines that Divide

Taking that gift of lateral leadership one step further combined with a sense of purpose that knows no geographic or political or social boundaries, this element of connecting across the great divide points to a natural desire to learn from each other, asking for and gaining advice from communities of women on the other side of some imagined or real line whether social, religious, racial or political. Those constructs disappear as barriers because the common cause and vision is the tie that binds. 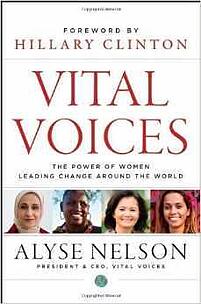 The centerpiece of the Bigger Game game board is Bold Action—it touches each of the 9 squares. As I listened to the stories Alyse shared and later read her book, bold ideas and bold action could be the slogan of Vital Voices. The two - ideas and action - become one. No one sits around in victim mode ruminating on what is wrong; every story is about action: progressive, inspiring, and not necessarily 'big' as in on a big stage or making a mark on large numbers of people. Sohini Chakraborty from India began her bigger game by teaching a handful of children to dance—children housed in a shelter for girls rescued from human trafficking and prostitution. These actions require tremendous courage whether the stage is a tiny house or the size of a country. Leymah Gbowee, 2011 Nobel Peace Prize winner, is quoted as saying "we spoke truth to power when everyone else was being diplomatic" as Christian and Muslim women united in Liberia to confront the warlord/president with a challenge to end rape and violence against women.

Finally, another common theme observed globally in women participating in the Vital Voices programs is that they "seek power for the purpose of empowering others—for lifting others up rather than keeping others down "with a "vision that extends beyond personal achievement." They pay it forward by helping others with similar issues tackle them by sharing insights and experience. They pay it forward by reaching down to help the next generation step into their roles as leaders. They pay it forward by creating environments in which not just girls, but boys as well, are introduced to new perspectives and new practices engendering respect for each other.

From the stories swirling around her through the years, Alyse found that leaders are not made but emerge from experience. They are compelled to act. Each of us, male and female, have the opportunity every day to create communities of support for and with each other. To start where we are, compelled by what we see as possible. What will you invest in today? Who will you invest in tomorrow?