How Do You Define Engagement at Work?

We are frequently called in to work with a team, department or organization after they have completed an employee engagement survey. This could be well known like The Great Place to Work or an internally created survey the company designed and delivered. Some of the categories measured include levels of trust, competency, strategic alignment, and engagement with management.

I recently asked a senior team we are coaching how they define engagement for themselves. We had been talking about stress and change, and how best to keep people engaged when the dynamics were constantly challenging due to exterior situations (competition, internal restructuring, new programs constantly being introduced, etc.).

Three points emerged from the conversation:

One comment referenced the importance of knowing your own strengths. This team uses StrengthsFinders and we were acknowledging that with two Achievers in the room and one Arranger sandwiched in between, it made for interesting dynamics each morning with the Achievers set to start all over and accomplish something and the Arranger still involved in making the other ideas come to life.

So, the team was defining its team profile and dynamics in order to strengthen interaction, ultimately leading to a form of engagement with each other that was appreciative of differences and drawing on individual strengths for positive momentum.

Engaged in the Work

Two of the team members quickly defined engagement as activity: to be action oriented, doing the work along with an awareness of the context of their work, its impact, its relevance. One of the Achievers defined it as showing progress on a daily basis. The third team member added the emotional component: to be actively engaged without complaint or sarcasm or other toxic behavior that de-energizes the individual and the team. Rather, to be active and interactive with enthusiasm and focus.

Some element of immersion came out of the discussion, too. This part of the definition relates to the literature which defines engagement as emotional commitment that results in discretionary effort. To be willing to go the extra mile, so to speak. But, primarily, to hear this team talk, it was very clearly the act of doing, getting things done, being productive, proactive, all of which defined the behavior of engagement for them. 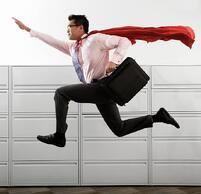 The third interesting and defining dimension was born out of a discussion of keeping people engaged in times of stress by understanding that person's motivations which led us to look at the situational leadership models. These models (Blanchard, Hershey, Beck) require us to take a clear look at the individual from the perspective of their skill: Do they have the skills required to succeed in this situation? Do they need support or training?  And "will". Do they have the inherent motivation, the desire to engage?

These three team members, all leaders of much larger teams, and ALL under the ongoing stress of change and increasing pace and complexity of work, agreed to apply this model to their current teams to determine from that perspective the level of engagement and the appropriate next steps for supporting each employee.

So, how do you define employee engagement? How does your team define engagement? What gets in the way and what encourages it?