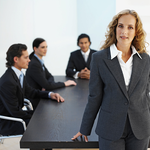 Organizations know that teams are the lifeblood of how work gets done. And, it’s understood that highly effective teams where trust abounds produce greater results, higher morale and retain talent for the future. The field of positivity supplies vast amounts of research on the connection between trust, positivity and results and the impact they produce on engagement levels and culture. So what’s stopping organizations and their leaders from developing teams with higher levels of trust?

First let’s explore what comes to mind when you hear someone describe a trustworthy leader? In our work over the past ten years with over 2000 leaders, a leader is considered trustworthy when he/she:

Patrick Lencioni’s 5 Behaviors’ of a Cohesive Team Model builds on this definition of a trustworthy leader, and tells us all those things are true but you have to have more. The intangible ability to be vulnerable is the “real deal” when it comes to building trust and creating the foundation of an engaged culture. 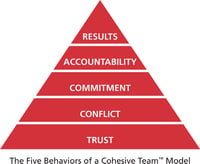 Years ago, I worked for a leader who could never admit anything was his fault. He was always right, infallible. If we disagreed on something about the direction of the business, and things heated up between us, he came out swinging. The closest he ever came to saying he was wrong? “Next time, don't let things get so out of hand between us”, he’d say, as if it were up to me to control what would escalate between us. And, I wasn't the only person on the team that struggled with his self-righteousness. Never being wrong made people want to avoid him, or partner with others on the team instead of with him on projects. It was a real shame because he had a true knack for business, was wicked smart and great with client execution. He eventually left the company because when his business results started to slide, he couldn’t admit anything was his fault.

Sadly, those types of leaders are still roaming inside organizations today wreaking havoc on their own teams and the ability for teams to cross functionally work together. Despite what we have learned about engagement and empowerment and the value of learning from mistakes, many leaders continue to drink from the fountain of “I’m right and you’re wrong”. They simply don’t know how to be real—to be vulnerable, self-reflective and to own their own mistakes.

You may be the team leader but that doesn’t mean that you have all of the answers. It’s okay to admit your weaknesses to your team. By being open to your team members, you can begin to build trust with them by modeling openness, transparency, and asking your team for feedback. Let your team members know that they should ask questions and provide input regarding the direction of the team. By embracing vulnerability as the team leader, you can help the rest of your team become more open with a willingness to share weaknesses, ask questions, and provide feedback. This is one of the key pillars for building trust on your team.

It’s bad enough when a leader can’t or won’t ever admit to being wrong, but layer on a leader who even when it’s known they screwed up not admitting that they did and you have a leader who is demoralizing the spirit of the team. A recent client experienced this first hand. Upon starting her new role, she was asked to focus on price when negotiating with suppliers, even when that meant putting pressure on the suppliers to take risks. She became alarmed when she discovered this pressure was causing the suppliers to take risks that would hurt the brand and put the company at risk. Sharing this news with her CEO produced a startling reaction. Instead of being pleased that she had uncovered news that could hurt the company, she was scolded and blamed for the pressure the suppliers felt to cut corners. Our client knew she was going to be blamed for this huge mess so she left the company. What hurt her the most? The CEO’s inability to apologize or acknowledge the role he played in the problem. High turnover and low morale remain persistently present in this culture, with the organization now looking for their 3rd leader over the past 5 years. It’s no wonder, the business is struggling and people are leaving the team and the company.

Do you admit your mistakes to your team? Are you afraid to apologize to your team because you think they won’t believe your or want to follow you? Apologizing to your team for past errors, lack of judgment, behavioral outbursts, poor communication and other blunders will show your team the importance of taking responsibility for mistakes and learning from them. If you act like you never do anything wrong, then your team members will feel uncomfortable apologizing for faults. They will lack the trust needed to take accountability for mistakes and, instead, they will play the blame game to avoid feeling guilty and facing any consequences.

Trust Destroyer #3- A Leader Who Won’t Ask for Help

I hate to ask for help. It feels like a weakness. I led several teams over my 25 years at Federated (Macy’s) Department Stores, and this was really hard for me. It cost me a lot too. It hurt my ability to be open to new ways to do things. And it set high standards for myself and others, that were impossible to keep. It created a desire for me to just work longer and harder and to expect that from my team. And the thing is, others knew when I needed help, so when they would ask me about it, my rejection of their offer hurt my relationship with them. Today, I still struggle with asking for help, but I have realized the ability to be vulnerable about needing help or support from others is a great way to build a relationship that is very powerful and more authentic. Over the past ten years of working along side my partners in our leadership development firm, I have experienced the joy it gives to others and myself when I admit I need their help. It makes them free to also ask me to help them when their burden is too great.

Learn to Ask for Help

After embracing vulnerability by being more open as a team leader and apologizing for mistakes and admitting when you are wrong, take the next step and ask for help. Some leaders have a superman complex where they feel responsible for every task. Or they lack the time, knowledge and resources needed but are afraid to ask for help for fear of looking weak to their team or their boss. Great team leaders are not afraid to ask for help. They have a clear sense of their strengths and weaknesses, therefore providing them the confidence to know when they should look to others for help. Also, great team leaders know that soliciting input from their team members and articulating how much they value their team members’ contributions serves as a positive way to build team trust.

Do you lead by example? If you truly want to build trust on your team, then model trustworthy behavior by being vulnerable. Create a safe and supportive environment on the team by showing empathy towards your team members, give them the benefit of the doubt, and follow through on what you commit to achieve. Encourage your team members to speak up and share their ideas, recognize their hard work, and embolden them to solve problems on their own. By modeling how you trust your team, in return, they will develop more trust towards you and the entire team.

Today’s organizations need leaders who want to run teams built to be highly effective. It takes work and commitment to engender trust on your team and inside your organization. So are you ready to take the first steps to becoming a trustworthy leader? Download our free team leadership self-assessment to gain clarity about your trust behaviors.