We recently worked with a group of 20+ senior executives at a rapidly growing company in the midst of repositioning its services. The laundry list of challenges was endless … and the enthusiasm for tackling them was waning. There appeared to be no forward progress on decisions that required cross-functional discussion and coordination. Assumptions were made about who was leading which initiative. And, even more foundational than that, no agreement as to which initiatives should actually be top priority. 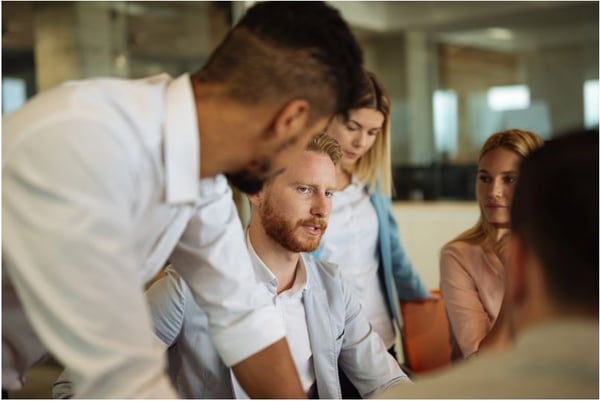 Let us share with you three tips and one tool for prioritizing and problem solving we have found simple to use and immediately impactful. These situations are typically messy and topics are complex. How do you move forward?

1. Set the Stage for Disagreement and Resolution

Margaret Heffernan has a wonderful TED talk if you haven’t seen it. She highlights cultures which encourage “the super chicken”, those super competitive individuals who stop at nothing. But this is to the detriment of the rest of the organization, because ultimately the only thing the super chicken cares about is him or herself.

She emphasizes that now is the time for everyone’s voice to be heard, for everyone to practice critical thinking and to be involved in solving messy problems. And that's as important as it is to not allowing a handful of super chickens to dominate, there can also be no “passengers”.

One of my favorite lines in her talk is:  "In successful companies, conflict is frequent because candor is safe."

Set the stage in your organization for frequent conflict—and let’s define that not as vicious personal attacks of blame and sarcasm, but, as Patrick Lencioni does in Five Behaviors of a Dysfunctional Team, as energetic debate and disagreement on concepts. When we encourage and allow all voices to be heard, then we find greater commitment to the next step for resolution.

2.  Take an Enterprise View:  What Matters Most

With the crew of senior leaders at the company mentioned above, we had them create a laundry list of what mattered most, not to them in their functional areas, but to the future of the company. This exercise requires an enterprise view, something rarely tackled cross-functionally, where everyone is heads down on being productive in their own lanes. Ask yourselves:  What is the most important problem, topic, or area we collectively need to resolve in order for the company to move forward and succeed?

We mapped the laundry list on a wall of flip chart paper and after spirited debate about how each area related to another, the group of 20+ executives identified 4 areas of the 15 listed that, if these could have attention and resources put to them, would make a huge impact quickly. It was also obvious that no one functional area could resolve any one of these topics—it had to be tackled cross-functionally.

3.  GROW into the Next Steps: Avoid Jumping Ahead

The executives then broke into 4 subgroups, choosing the one for which they had the most energy, the most interest, the most passion. This is key. You have to care.

We applied the GROW model for problem solving—typically used as a model for moving individuals through a coaching conversation with the coach asking a series of questions to help the individual clarify the problem, explore ideas and commit to next steps, the process is very effectively used by peers on teams to guide developing priorities and solving problems.

Our natural inclination is to say here’s the problem, now (jumping ahead) what do we do about it? But when we jump ahead to action without looking at it through a shared lens of current reality, understanding past experiences, and exploring different views, we make assumptions…and mistakes.

We are happy to share with you the template we use with teams so they can move through this often messy and potentially complicated process quickly and effectively. Download the tool here (link).  And discover just how clarifying it can be to use these simple steps: 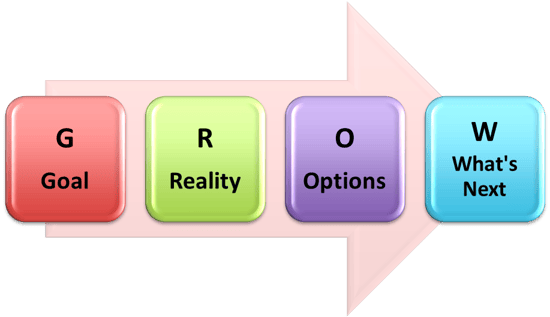 G: What’s the GOAL of the discussion?

There are BIG GOALS (like create a culture that embraces conflict) and there are immediate goals to help you get there. So for a particular discussion, the goal could be: describe the type of culture we as senior leaders want to create. And the conversation then focuses on identifying what is and what could be…resulting in action steps to move forward on the “what could be” elements. Or the goal of the team discussion could be a deeper dive on challenges that impede creating a more open culture and ideas for specifically resolving those. Once you complete the GROW process on one topic, typically it lends itself to another goal to explore more fully, so the conversation builds upon itself.

R: What’s the current REALITY of the situation?

O: What are some OPTIONS?

This is the time for brainstorming ideas, for sharing what’s possible. There are tons of tools to help do this. We’ll post a few in a later blog.

Now the team focuses on choosing one, two or three action items they commit to undertaking by a certain period of time. And, as mentioned, this usually results in another goal for a future GROW conversation.

So this seemingly simple process has now gotten the team focused and committed, not just to next steps, but to each other as well.

Download our free GROW for Teams template. Try it and let us know what you think!