In most organizations, there exists an Executive Team, the C-suite executives who set the strategy and the direction of the company at a high level. These leaders are leading out in front and they have most of their debate and candor with their highly experienced board members. While these conversations take stock of the current business and execution of the plan, they are designed to be futuristic in nature and are highly influenced by the end game—to secure a new round of funding, to execute the IPO, to maintain or increase stock price with shareholders/the street.

The executive team has a leadership team as well, a group of SVP’s and VP’s whose sole function is to deliver the strategy, maximize the opportunities, solve problems together, push back when the top-down direction lacks clarity or marketplace relevance. In today’s time strapped cultures of do more with less—this is where we see the real squeeze play. Because the Leadership Team is simply being asked to do more with less, while solving very complex problems with more people than ever contributing to the decision making process. They not only lack the skills, they avoid the conversations.

Where do peers struggle the most with conflict? Where are they having the conversations that need candor? And, where are they not? The single biggest issues we see among Leadership Teams (VP’s) are:

•Scarcity of resources and the dilemma around functional protection versus business need (hiring freeze, that doesn’t affect me I’m sales, marketing, etc)

•Poor follow-through by a peer, letting someone down and not apologizing or owning

•Difference of opinion on how something should be done, agree passively in the meeting, go execute something different afterwards (lack of alignment)

•Throwing someone under the bus (blame)

The Conference Board’s research with over 22,000 people illustrates the business imperative for why organizations need to develop leaders who can collaborate, engage in candid conversations that resolve conflict and solve problems and the growing need to truly comprehend the amount of people involved and impacted by collective decision making. 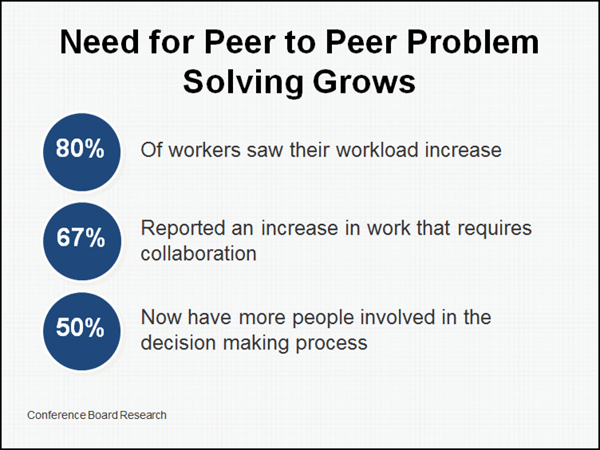 Recently, we worked with a client grappling with the potential explosive growth of the company and a leader told me last week, “Look I’d rather just solve the problem myself, it saves time and it avoids the messiness of trying to work together. Half the time, the way I look at something is completely different and the conflict is something I would just rather avoid. When I don’t, it’s like world war 3 around here.”

Candor, disagreement, conflict. Many people would rather go out of their way to avoid it, than be forced to deal with a difficult peer or be forced to spend the time finding the best solution. But avoidance of conflict prevents peers from truly collaborating and moving an issue forward to shared resolution. Based on the research above from Conference Board with over 22,000 leaders across the globe, more people than ever are affected by the decisions a leader makes, yet the desire to bring passion and candor to a discussion is still as elusive as its ever been.

So why do we struggle to collaborate with peers and make important decisions that involve conflict?

•We believe conflict is bad. We have learned to avoid it. We have seen it done wrong—where it has been personal and mean spirited or we have been on the receiving end of a poor exchange.

•We believe it takes too much time or we only see resolution if its win-win. If we lose we may work hard to sabotage the solution and prove we were right

•Build trust that is real and authentic. Allow a way for leaders to truly get to know each other in a meaningful way, so that candor is safe.

•Build time for the leadership team to focus on the biggest issues that all areas in the company need to resolve so that there is a collective desire to put aside turf and silo.

For many companies with Executive Teams that hand down strategy to be implemented by the Leadership Team, the lack of candor among the leaders may just be the real obstacle to your next audacious goal of an IPO, or increased stock value.

Question for companies, how many leadership team members do you have involved in the decision making process? And, on a scale of 1-10 (with 10 being the highest) how skilled are you in having the candid conversations that solve problems?